Please help us, help them.

Oct. 20, 2021 WROEH's Robin Conklin saved this trapped deer from a common,
yet deadly fencing issue.
The buck was also tangled in the fencing and had already sustained
a broken antler and an injured eye from being trap and was
approaching exhaustion and starvation.
Robin was able to cut the antler free, untrap the deer, tend to its wounds
and send it back ointo the wild.

Robin Conklin has been doing amazing work with WROEH,
since he filled the shoes of founder Dell Cullum who
retired in September 2021.
Robin is both knowledgable in wildlife rescue and compassionate of our wildlife.
A perfect fit!

This Black Widow spider was a little too close to home for one family, so they called WROEH for help.
Dell Cullum responded and checked the spider's web and hiding hole for an egg sack or a male mate, but neither were found.
Therefore the young female spider was carefully removed and relocated.
Black Widows bite when they are protecting themselves, however this one crawled onto Dell's finger on its own
without biting, then into its new home in a wood pile. 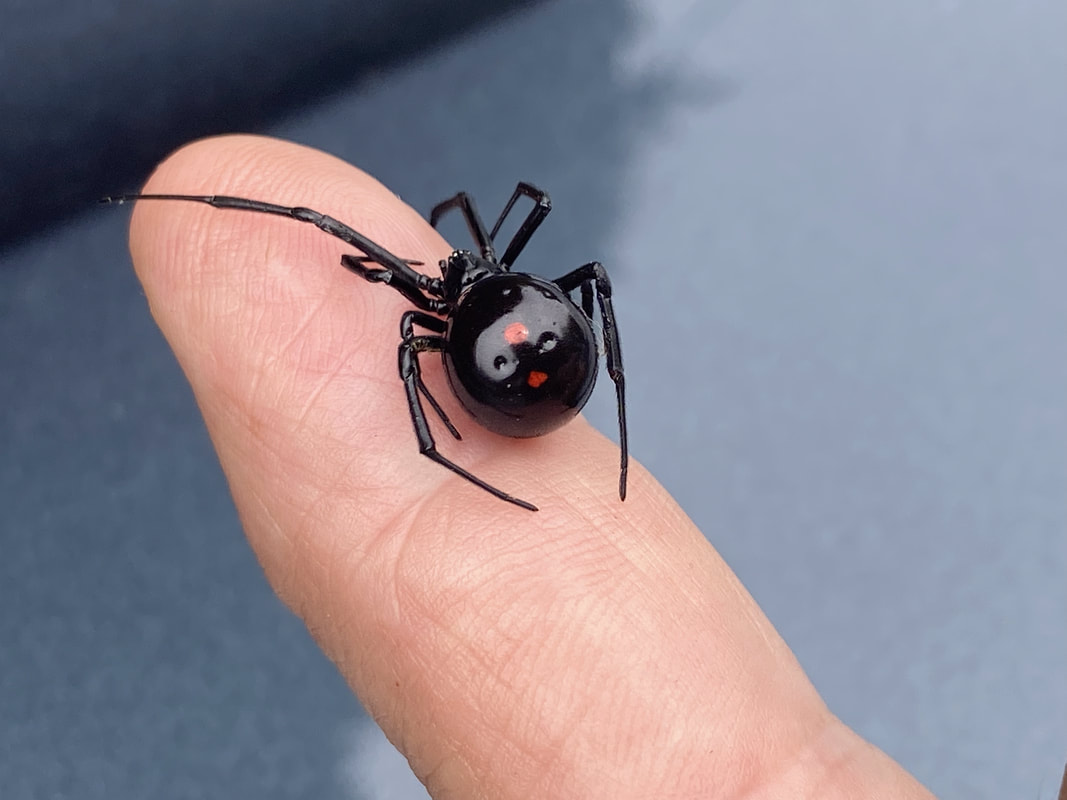 This Red Tailed Hawk got glue on its wing and breast feathers and was grounded and vulnerable to predators. The glue is the kind used around tree bases to keep insects from crawling up trees. This is old-school stuff, and clearly not a good choice of deterrent. WROEH founder Dell Cullum spent hours getting the glue off, then cleaning the wounds sustained during the original incident. The poor hawk pulled vital feathers out trying to free itself from the glued tree. The hawk was cared for until its wing was capable of flight. It ate very well during rehab and while taking antibiotics 3 times a day. Its perfect behavior and trust got this bird to mend wonderfully, and it was released just two weeks after being rescued.

Muskrat "In the Hole" Rescue

Dell & Robin got a fallen nestling back to its family after a week long search for the nest in a vulnerable location. There were many possible hollowed limbs in the drop zone and no signs of mom or dad, so Dell cared for the little guy for several days before finally spotting mom in a large nearby branch cavity. The large limb was badly rotted and the cavity very high. Meanwhile, fresh signs of a raccoon were found nearby and a cat was also spotted in a nearby tree. The standard box re-nesting procedure was off the table and Dell eventually made a box that could be hoisted right up to the hole. Unfortunately, a flap of cardboard folded over during the hoisting, keeping the baby from exiting the box. So, the next day Dell met Robin Conklin at the location and Dell slowly stepped up a very long and narrow ladder that was lightly leaning against the rotten limb, while Robin footed the ladder and kept it from shaking. Once to the top, Dell removed the owlet by hand and placed him in the cavity right next to its mom. Just before leaving, mom gave us a look of thanks. 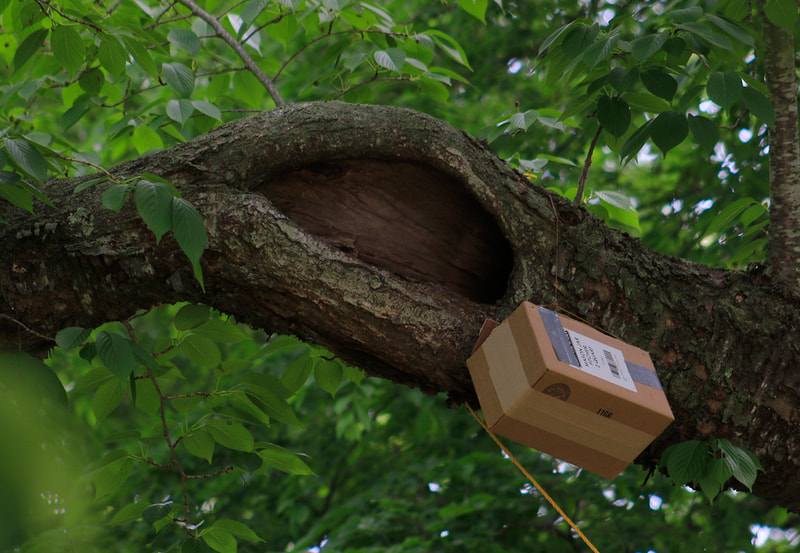 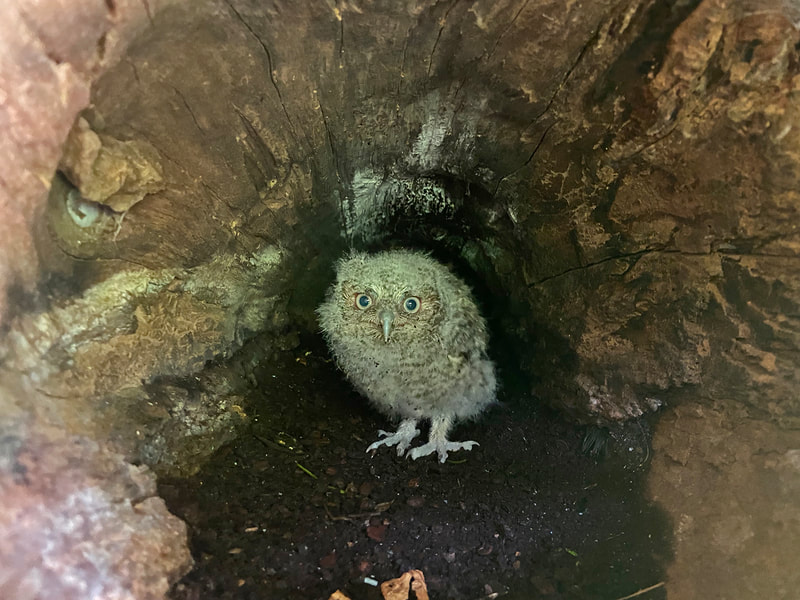 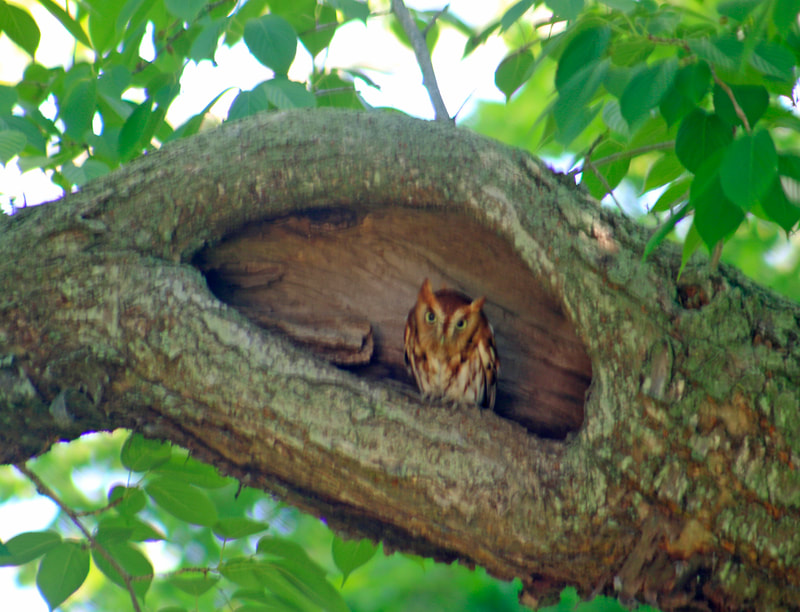 WROEH & WATERFOWL USA Come Together to help the wood duck

WROEH and Waterfowl USA join forces at the EH Village Nature Trail to install Wood Duck houses for the growing population of Wood ducks at the "duck pond". Waterfowl USA bought the materials and hand built these awesome and sturdy wood duck houses. They were sprinkled with a bedding of soft shavings and installed in three areas IN the dreen (water) where the Wood ducks often congregate. Two local organizations working together for proper conservation and to benefit our wildlife. 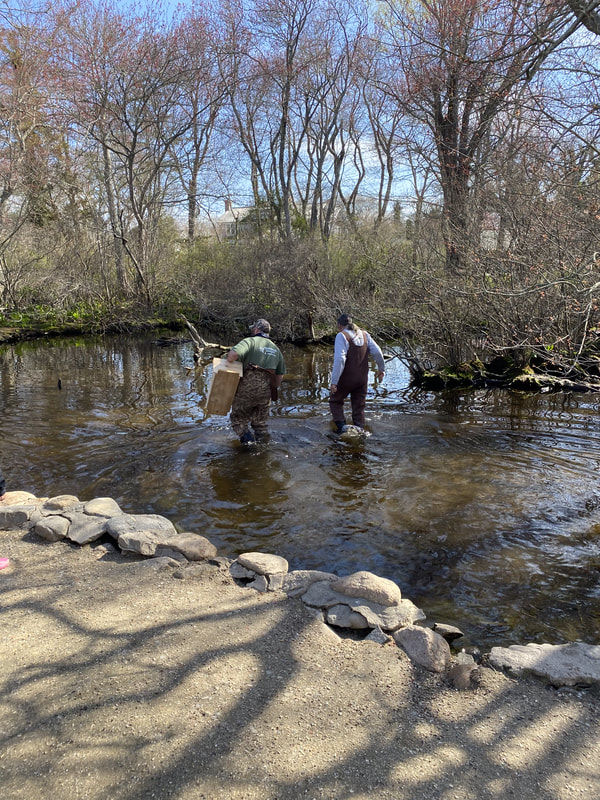 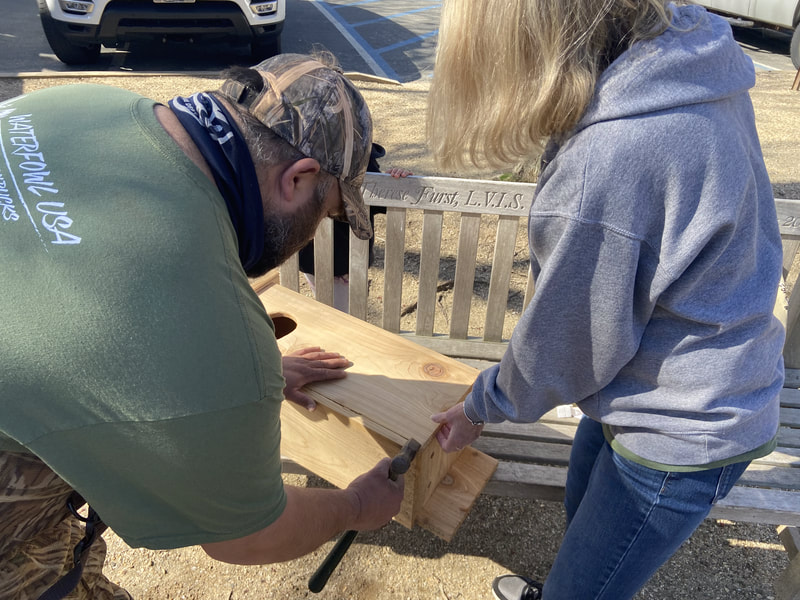 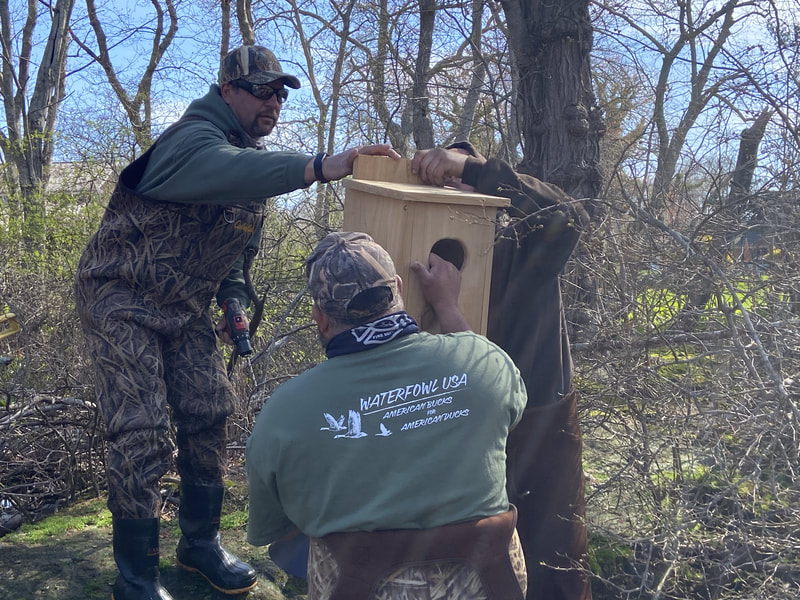 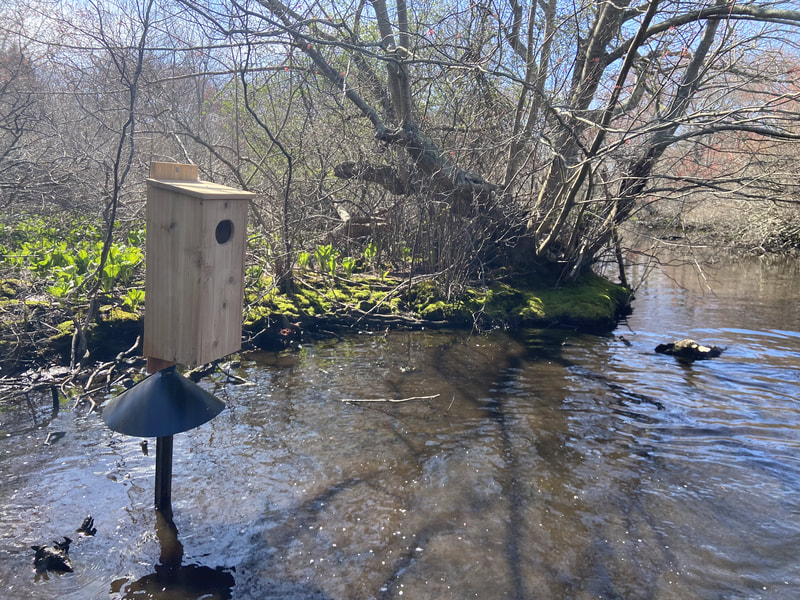 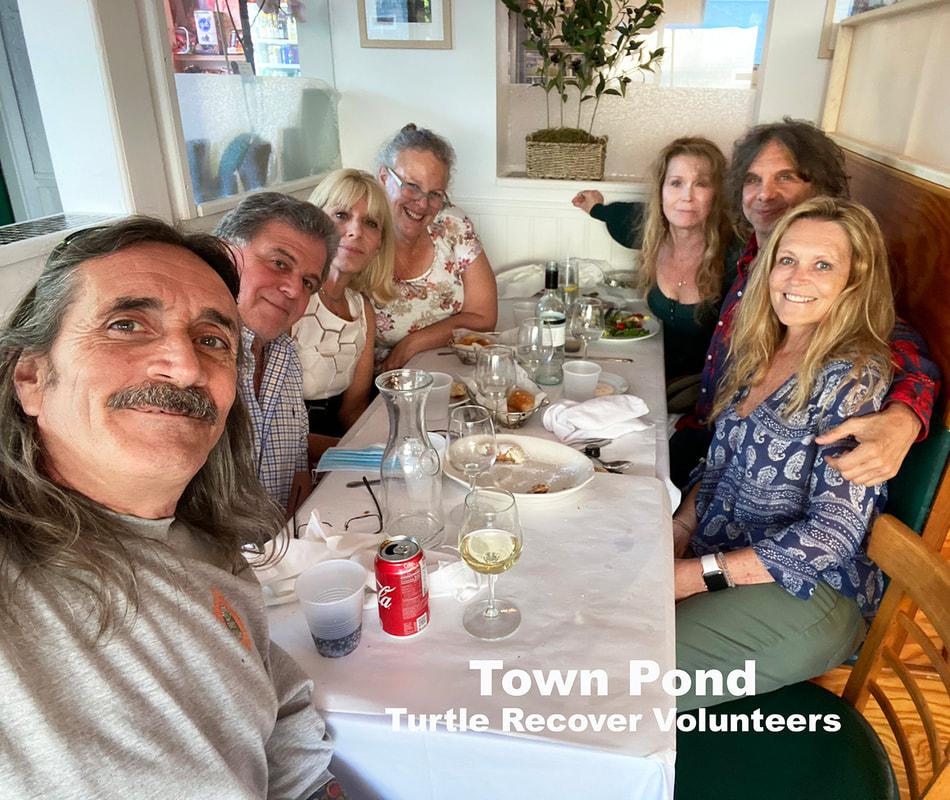 As of May 7th 2021 we have safely recovered 15 turtles from the
​Town Pond Restoration.

The East Hampton Village Town Pond is being dredged to improve the water quality and bring the water level to its normal depth. Unfortunately, the NYSDEC issued a permit WITHOUT considering the life in and around the pond. It's winter, and not the right time to disturb the mud where countless numbers of reptiles and amphibians, particularly turtles, are in their semi-hibernated state (sopor). The heavy equipment and digging has already caused several turtles to prematurely become active. Fortunately, the NEW Village mayor and all trustees were very sympathetic to the issue, and they called an emergency meeting Saturday Feb. 27th. The project was halted and the Village designated WROEH to lead a team of volunteers to recover as many turtles (and wildlife species) as possible in two weeks. We immediately hit the mud and recovered a dozen or more fish (including two beautiful Koi) and -to date above- 12 turtles, which happened to be Red Eared Sliders (except one is a native PAINTED TURTLE). The slider turtles are an invasive species and will not be returned to the pond once dredging is complete. Four (4) turtles were delivered to SoFo and the other's were housed by WROEH and given to private pond owners. The Painted Turtle was released in Andy Sabin's personal pond. Thanks to the Village, Bistrian's crew, Jackson Dodds Tree Company for their cooperation with us during our recovery efforts.
Special thanks to all WROEH volunteers who came out to save the turtles:
Bill Nuss (from Turtle Hospital of East Hampton) - Kathy Green - Lori Hawkins - PJ Delia -
Paul Frediani - Brook Spencer - Lisa Blinderman
and all the volunteers that were standing by.
​We will continue to spot for wildlife as the project continues, until it is completed. 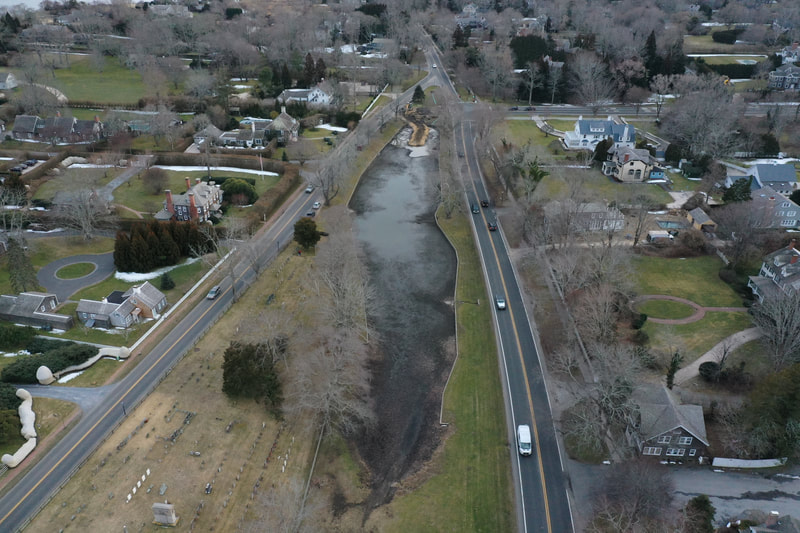 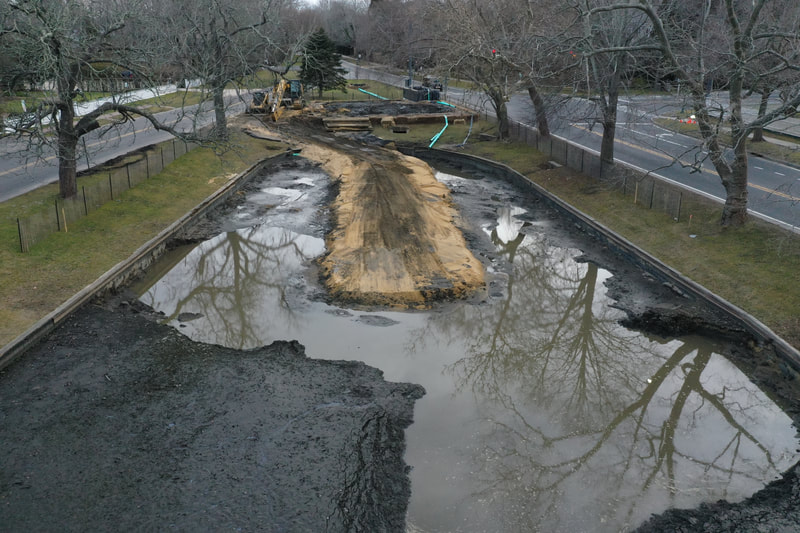 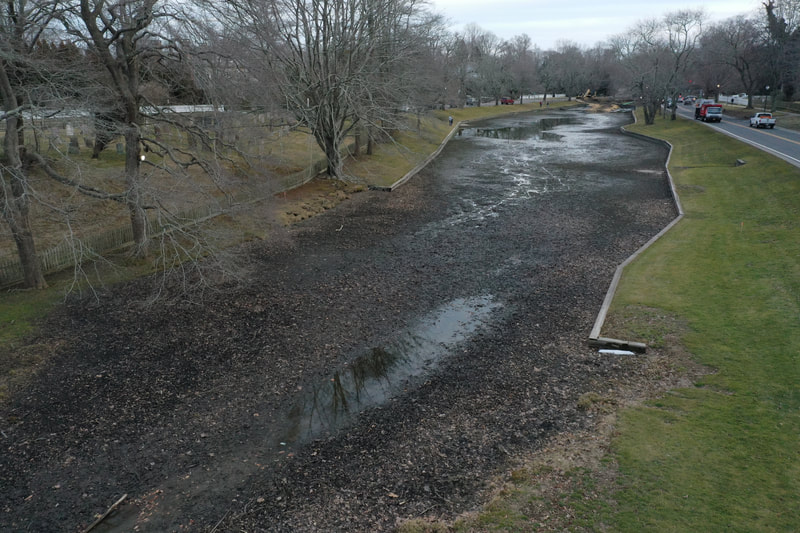 Raccoon Under a bed 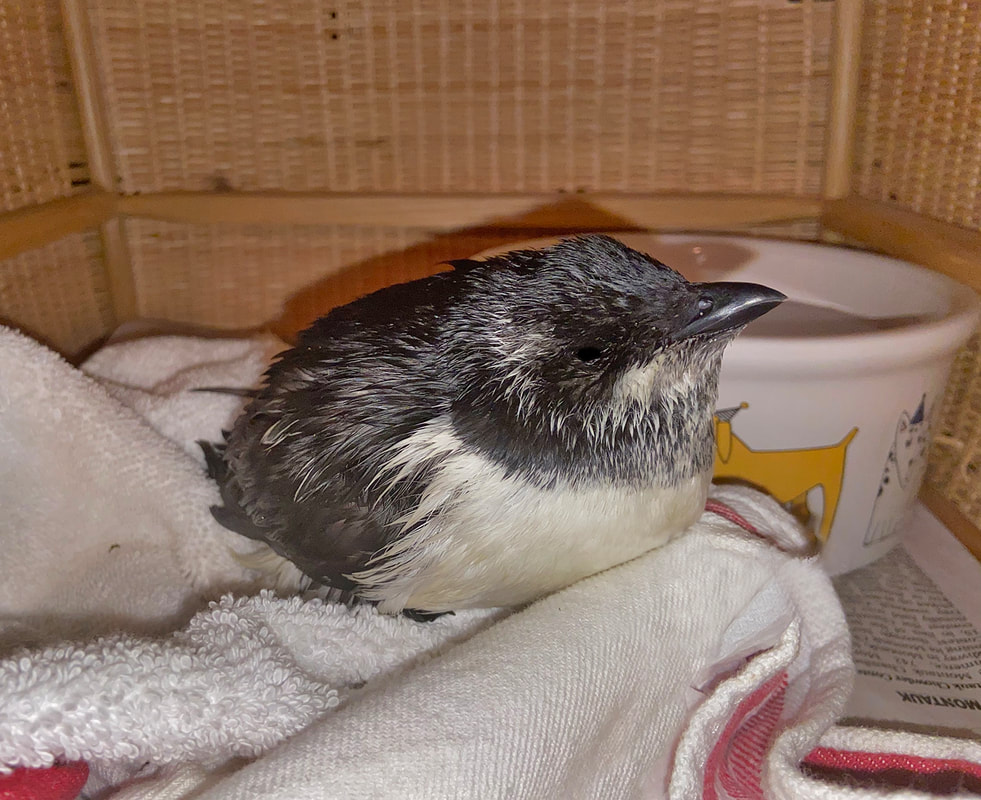 This little girl got herself in a really tight situation. Thankfully, the homeowner was around and saw the trapped doe, called the EH Town Police who then contacted WROEH. With the help of Officer Stavola, Dell was able to safely back the deer out of the garden ornamental. The doe had minor abrasions on two of her legs from kicking inside the cage, but after a short rest and balance reset, the youngster walked away without a hitch in her step. A great pre holiday success.
Thanks again to the East Hampton Town Police Department. Officer Stavola is no stranger to unique deer rescues as she and Dell responded to a large buck who fell and landed upside down between a retaining wall and the erosion behind it, in Montauk a while back (see video of that rescue at the very bottom of the page; Unique Deer Rescue). 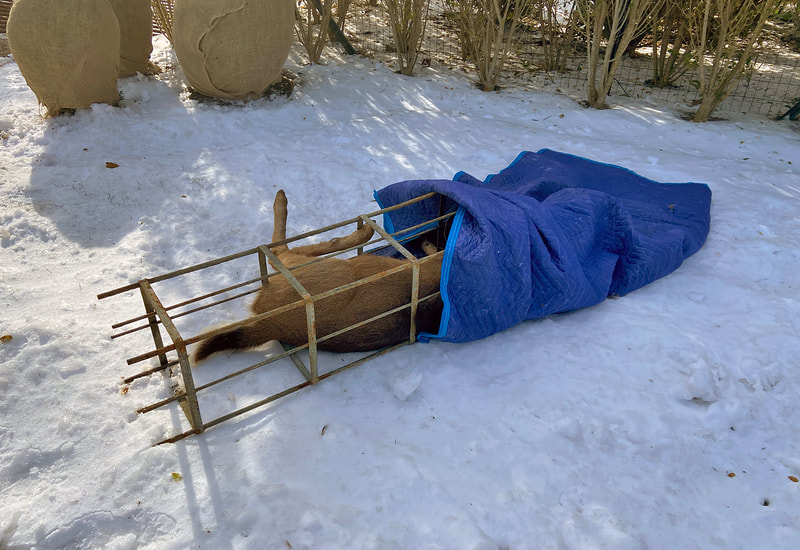 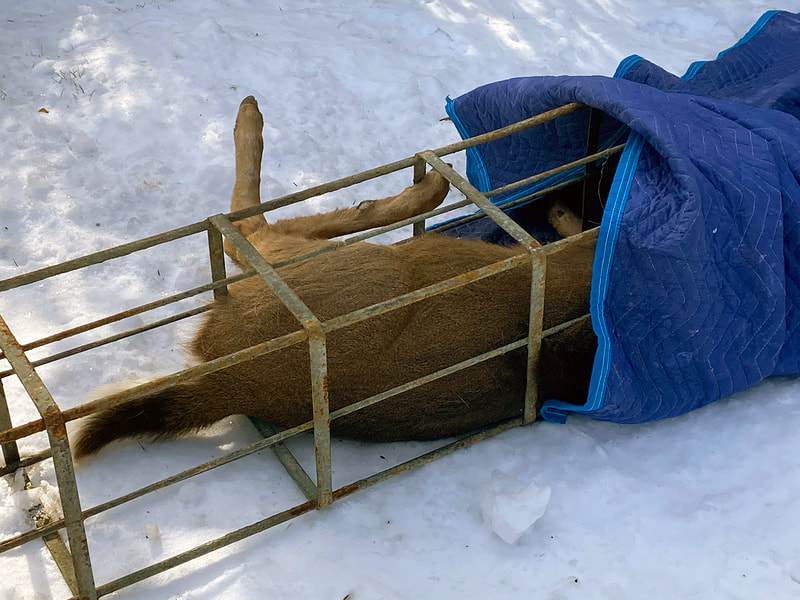 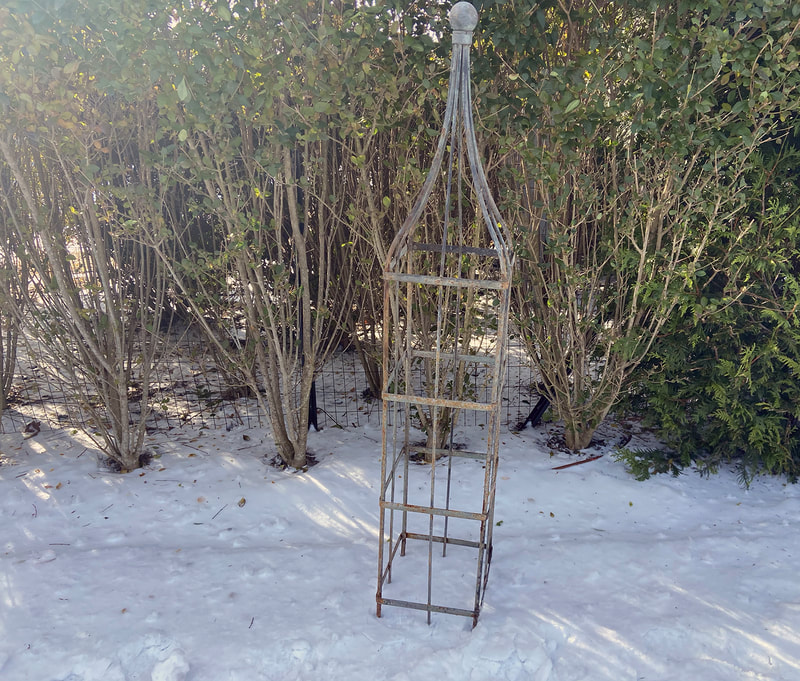 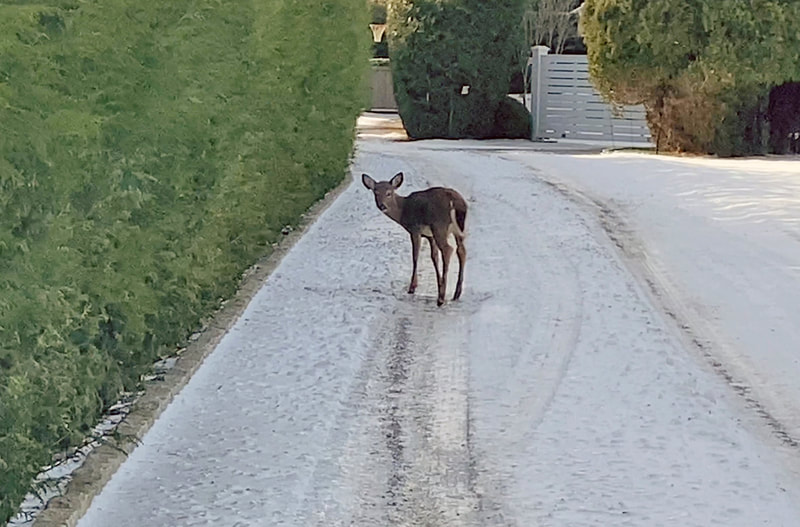 Another lucky Saw Whet was found while clearing a lot. The machine operator stopped work, held the little bird and kept it safe until I arrived. The wing seemed a bit off, but after a closer examination at the rehab center, it was determined there were no fractures or internal injuries. The little owl is presently recovering nicely and will be released back into the wild very soon. A wonderful effort by a bunch of big people to save the life of this one little critter.

This little beauty struck a window at the Seinfeld home in East Hampton and was fortunate to be found. I took the owl to our local wildlife veterinarian Dr. Turetsky who gave it a general examination and found slight swelling and a small cut above the eye. I took the little bird home and kept a very close eye on it for several days to be certain there wasn't any other head trauma. It would get better each day. It was happily released after fully recovering. Thanks to Noah Stolmeier for finding the injured owl. 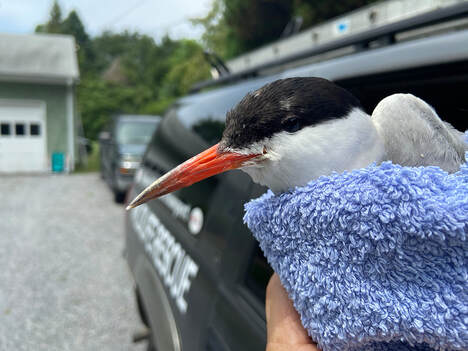 Tern rescued from Dayton Island by a kayaker. She called WROEH when she found the injured bird and was given instructions on how to safely secure and transport the Tern to the mainland. She did a great job and was met by Dell as she came onto shore.

It's great to see more and more folks helping our wildlife. If you ever come upon an injured animal and you're not sure what to do, you can ALWAYS call 844-SAV-WILD, Press 0 to report an emergency, and someone will call you right back. In fact, call and listen to the menu of options at 844-SAV-WILD and become familiar with them, so we can be there to help when you and the animals need us. 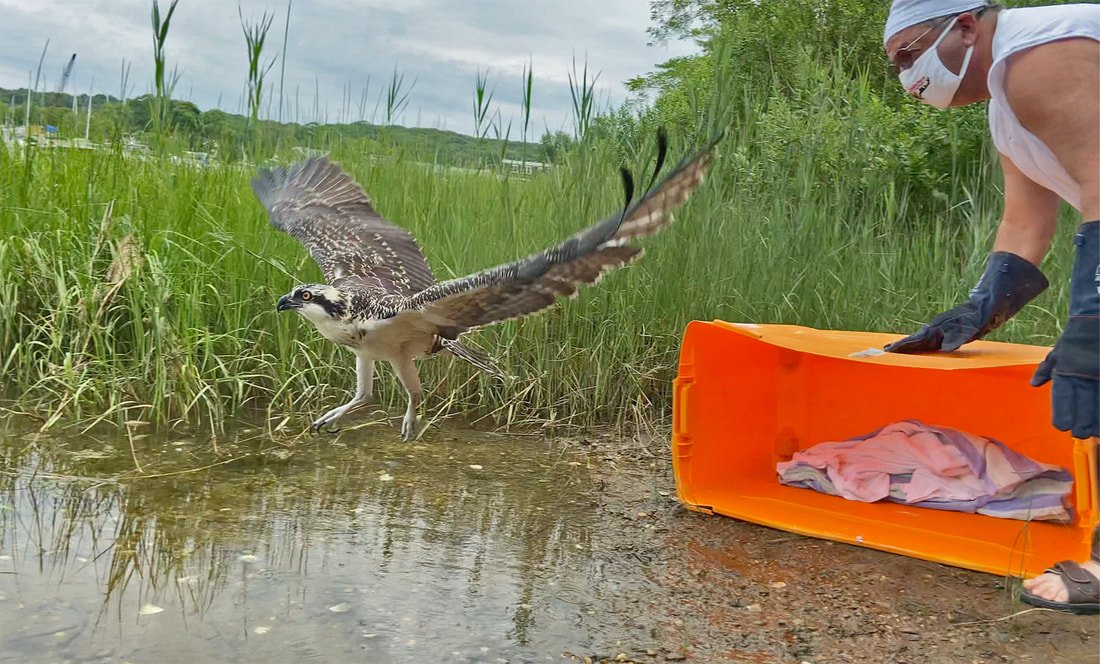 Volunteer Robin Conklin rescues baby opossum from swimming pool filter:
Its name is phil (short for filter) and is being rehabbed at WROEH.

WROEH's Robin Conklin and EA's Missy Hargraves renest an osprey chick after its nest collapsed. One chick perished, one saved.
​Robin will be building a new and more secure nest at this location for next season.         Photos by Durell Godfrey

July 4th:  Dell cuts plastic fibers from the leg of a robin who got tangled up in a high tree and was hanging upside down.

Joshua Brussell and Matthew Classens get close to a swan to check it for injuries, after it was reported to have been in a rough territorial dispute with another cob. No injuries on either swan after a good check, and a great effort by the volunteers. Cliff and Lisa Blinderman were also there with shore nets, and Joe Connelly ready for transport if necessary. It wasn't.

How to: Remove baby opossums from a dead female's Marsupium (pouch)

Thanks to ALL the wildlife rescue and rehab volunteers. WROEH has been busy all spring and it's flowing right into summer. Just today we've had several rescues and transports and the day is only half over. Thanks to our transport teams and rescue responders. We were even able to help rescue a beautiful little kitten that fell into a storm drain (with the amazing help of a passer-by named George Watson) and responder Valinda Valcich. Great teamwork. We got baby bunnies to our expert friend Chrissey, a baby muskrat named Maury to the rehab center with 4 opossum joeys whose mom got hit by a car.

Raccoon  in the Duct-work

Rescue on the evening of January 31, 2020 after being hit by a vehicle - Brought to Wildlife Rescue of East Hampton where it was cared for through the night - Transported to the Vet Clinic / Dr. Katz examines and sends to rehabilitated center for a month. The great care allows the bird to fully recover - Picked up and released by Dell Cullum (WROEH) March 2nd, 2020, after a full recovery, thanks to Ricky King, Dee Cullum, Dr. Katz and the staff at the Vet Clinic, the rehab center; all responsible for getting this beautiful screech owl better and back home in the wild. A small life saved by many huge acts of kindness.

November 5, 2019 - A second deer with a leg injury is reported at the shoreline just east of Atlantic Avenue beach. I respond immediately and meet photographer Doug Kuntz at the scene. It's pouring rain so Doug takes only a handful of photos before leaving the beach to seek cover. The short film below covers the entire process. Thanks to the homeowner on the bluff who saw and reported the distressed deer. The end result is also one for celebrating.
Update: November 4th 2019
The Beach Buck is doing much better than the day he was rescued at the shoreline of the ocean a couple weeks ago.
He's getting along much better with only three legs. A healed fracture in the fourth disabled leg shows no signs of infection as was confirmed by the vet when initially rescued. It's a process of acclimation but, the deer of East Hampton face so much adversity, that a simple limb loss is in most cases easily accommodated. The shot below shows the Beach Buck in the brush, quite healthy looking. 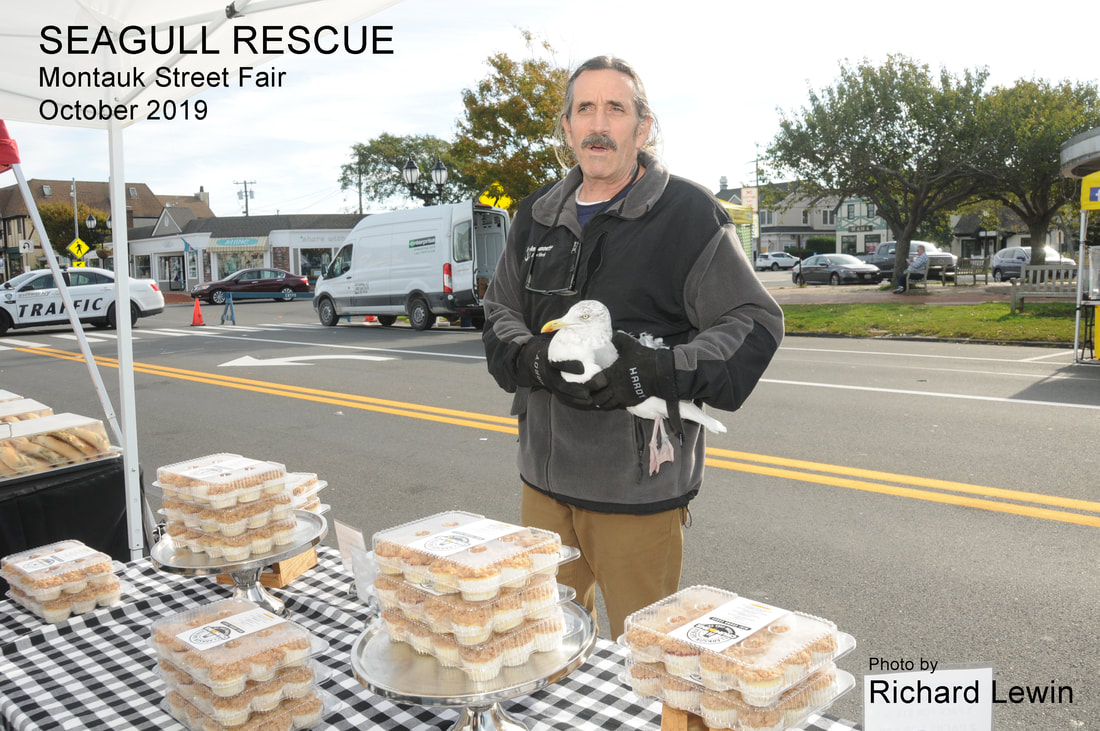